BLOOM OF SKILL
A SUCCESS STORY ON CARPENTRY
RathnammaW/oGovindachari residing in Malakanahalli village in MalurTaluk is a landless daily wage labourer. Rathnamma is a member in a Self Help Affinity Group (SAG) called Bharathi Mahila Sangha. She has four children; one of her sons Mr. Anand is supporting his family through his earnings. Anand was working as an assistant to a carpenter in Masthi village and getting Rs. 100 per day as daily wages which was not enough to feed the family because he was not skilled in carpentry work and also had no instruments to carry out the job. He was able to get work for around 280 days in the year and the rest of the days he had no income and was wasting his time.
Fortunately for Anand and Rathna a programme called “HUVF, NABARD and MYRADA Watershed Development Programme” was introduced to the village. The intention of the programme was water and soil conservation activities on the lands of farmers and supporting landless families by providing income generation activities to improve their livelihoods. 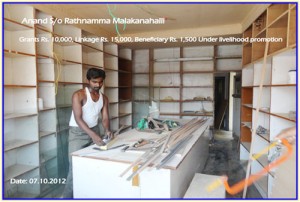 MYRADA staff identified landless families through SAGs to provide them livelihoods. Rathna said that her son Anand who is a carpenter would be benefitted if he were provided carpentry skill training. He was selected for a three-month carpentry training supported by an NGO called labournet. After completing the training he continued his job as an assistant to a carpenter.

Presently with the help of this programme he purchased Rs. 28,000 worth instruments (Rs. 10,000 grants, Rs. 15,000 loan from Sanghamitra and family contribution Rs. 3,000) during October 2012. Now he is working independently in and around Masthi as well as in towns like Malur, Bangarpet, Kolar and sometimes in Bangalore. Now he is self-reliant. With his own instruments he can earn more money even up to Rs. 15,000 per month; besides on contract he can earn good enough every month. He also provides job work to three other workers. With the increased income, they have conducted the daughter’s wedding and are able to save some money in chit funds.
Hence Mrs. Rathnamma and Mr.Anand saythey are grateful to the project which has come to their village as a boon and they are very happy.